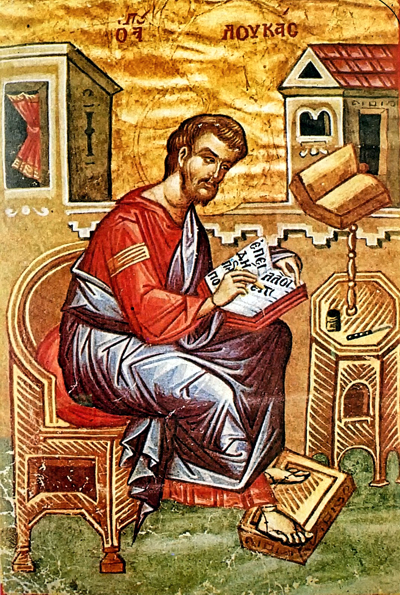 Almighty God, you called Luke the physician, whose praise is in the gospel, to be an evangelist and physician of the soul: by the grace of the Spirit and through the wholesome medicine of the gospel, give your Church the same love and power to heal; through Jesus Christ your Son our Lord, who is alive and reigns with you, in the unity of the Holy Spirit, one God, now and for ever.

They went through the region of Phrygia and Galatia, having been forbidden by the Holy Spirit to speak the word in Asia. When they had come opposite Mysia, they attempted to go into Bithynia, but the Spirit of Jesus did not allow them; so, passing by Mysia, they went down to Troas. During the night Paul had a vision: there stood a man of Macedonia pleading with him and saying, ‘Come over to Macedonia and help us.’ When he had seen the vision, we immediately tried to cross over to Macedonia, being convinced that God had called us to proclaim the good news to them. We set sail from Troas and took a straight course to Samothrace, the following day to Neapolis, and from there to Philippi, which is a leading city of the district of Macedonia and a Roman colony. We remained in this city for some days.

1    Alleluia.
How good it is to make music for our God,
how joyful to honour him with praise.

2    The Lord builds up Jerusalem
and gathers together the outcasts of Israel.

3    He heals the brokenhearted
and binds up all their wounds.

4    He counts the number of the stars
and calls them all by their names.

5    Great is our Lord and mighty in power;
his wisdom is beyond all telling.

6    The Lord lifts up the poor,
but casts down the wicked to the ground.

7    Sing to the Lord with thanksgiving;
make music to our God upon the lyre;

As for you, always be sober, endure suffering, do the work of an evangelist, carry out your ministry fully.

As for me, I am already being poured out as a libation, and the time of my departure has come. I have fought the good fight, I have finished the race, I have kept the faith. From now on there is reserved for me the crown of righteousness, which the Lord, the righteous judge, will give to me on that day, and not only to me but also to all who have longed for his appearing.

Do your best to come to me soon, for Demas, in love with this present world, has deserted me and gone to Thessalonica; Crescens has gone to Galatia, Titus to Dalmatia. Only Luke is with me. Get Mark and bring him with you, for he is useful in my ministry. I have sent Tychicus to Ephesus. When you come, bring the cloak that I left with Carpus at Troas, also the books, and above all the parchments. Alexander the coppersmith did me great harm; the Lord will pay him back for his deeds. You also must beware of him, for he strongly opposed our message.

At my first defence no one came to my support, but all deserted me. May it not be counted against them! But the Lord stood by me and gave me strength, so that through me the message might be fully proclaimed and all the Gentiles might hear it. So I was rescued from the lion’s mouth.

After this the Lord appointed seventy others and sent them on ahead of him in pairs to every town and place where he himself intended to go. He said to them, ‘The harvest is plentiful, but the labourers are few; therefore ask the Lord of the harvest to send out labourers into his harvest. Go on your way. See, I am sending you out like lambs into the midst of wolves. Carry no purse, no bag, no sandals; and greet no one on the road. Whatever house you enter, first say, “Peace to this house!” And if anyone is there who shares in peace, your peace will rest on that person; but if not, it will return to you. Remain in the same house, eating and drinking whatever they provide, for the labourer deserves to be paid. Do not move about from house to house. Whenever you enter a town and its people welcome you, eat what is set before you; cure the sick who are there, and say to them, “The kingdom of God has come near to you.”

Sermon on the Feast of St Luke the evangelist

“You called Luke the physician, whose praise is in the gospel, to be an evangelist and physician of the soul: by the grace of the Spirit and through the wholesome medicine of the gospel, give your Church the same love and power to heal.”

These words from the Collect should guide our thoughts for today, the Feast of St Luke the Evangelist. Haven’t physicians been foremost in our thoughts for the last nine months. Those in that “front line” have been appreciated by the population’s clapping at the very beginning and prayed for by the one, holy, catholic and apostolic Church day and night, as they struggle to bring health to those struck down by disease in today’s covid pandemic. Physicians themselves must be praying to St Luke for the gifts he had been given so long ago, to allow them to heal the sick in body and mind. I think we pray for all doctors to become physicians of the soul as well, distributing that holy medicine of hope to all their patients.

I rushed to Wikipedia to give me some further information as background on St Luke. The article I found had an interesting discussion of the historical accuracy of Luke–Acts. Some scholars suggest that it is as good as it gets for information in any history book, while others argue that the purpose of his writing is evangelistic, not historical at all, and so taints it for historical accuracy. I think a road down the middle of these two opinions should be taken.

I think Luke does provide some details which are accurate, but there are some things that are not “scientifically” reliable. One of my teachers took this route as well, for he said that Luke follows the method of all historians of his period. Using all the material at hand, he assembled it to make his point. In other words, he was able to inform the audience he wished to influence with the facts as he had them. My teacher said that Luke was not statistically correct in all he said and he may have had a bad chronology, but he could be relied on for geographical detail, and perhaps the biographical detail. Luke’s purpose in writing the gospel and the book of Acts was one of an evangelistic mission to a mixed audience, Jewish and gentile.It was a Hellenistic audience – in other words, they were Greek for all intents and purposes. The themes and motifs used are more of the culture in which Judaism found itself in the first century of the common era, the syncretistic world of the time, where there was a mixing of all people no matter where they came from. Culture is never as pure as we think it is or ought to be. Every culture borrows from their neighbours and those with which they come into contact.

I think you will find Luke as syncretistic as you would find the one, holy, catholic and apostolic church in that period. All became grist for the christian mill. The religions of the area contributed to the stories, symbols and ritual of christianity.

The christian mill was, as one saint wrote, the jaws of the lions in the arena which ground the bodies of martyrs to the finest of flour for the bread of life offered at the Eucharist. That bread and wine becomes for us the medicine of immortality, the body and blood of Christ. This is the offering Luke continues to make to us, as he did for his contemporaries. And so we come back to the evangelist Luke. Ancient writers called this man a physician: it would seem that such an attribute is well suited, for his use of language is quite sophisticated, not as complicated as the letter to the Hebrews, nor as simple as the language of the gospel of John. Early on in the history of the church, the literary heritage was established.

This author was well respected as a source of its own story. He recounts much from earlier sources and then speaks with authority about some of the history. As our reading from the book of Acts makes clear. There is a significant change in the person speaking in the narrative. Up to chapter 16 it is a third person narrative and in this chapter the first person plural, the “we”, is introduced. “We immediately tried to cross over …” and so on. Many have taken this to mean that Luke was one of the 72 disciples named in the gospels. Or some have seen that Luke has used an eye-witness testimony to the events described in the Acts of the Apostles. Whatever stance we take on who this Luke is relative to Jesus, we must  acknowledge that Luke has given us an account of the ministry of Jesus and a history of the origins of the church. There is an authority we recognise in his writing, even if it uses the forms and manner of the Hellenistic time in which he lived.

Why does the narrator’s voice change at this point in the story, after that vision he describes of the man calling them to Macedonia? Such a vision is a major event in the mission to the gentiles and it allows us all to join in it, doesn’t it? Such an event and its significance is also a reason for this early historiography to be called into question. “After all,” they ask, “how can you believe a story that depends on the supernatural for its validity?”

That is the question that is asked, when any christian speaks of their faith and the Easter–Event. Let us short-circuit that discussion now with the statement that major events in life do determine how we tell our story, and those major events are couched in terms that make sense to our contemporaries and to ourselves wherever we find ourselves.

These considerations of how we tell our story – in other words, the language we use and the symbols we employ – are conditioned by our setting, witnessed by the fact that many of our biblical scholars are elucidating scriptures today by looking at the setting in which the particular texts were written and the audiences for, and to, whom they were composed.

In other words, we, like Luke, need to be speaking in the first person plural about the significant events of our lives, that we should be offering our contemporaries that medicine we have taken in this pandemic to give us peace of mind and the beginnings of a healthy attitude toward our selves and neighbours, that love for God, ourselves and our neighbours.

This is the medicine we should be offering to everyone we meet, so that health may be theirs. We pray in the words of the Collect that we – the Church today – may have that power to heal the whole person that medicine of immortality which St Luke shared with the world when he wrote his gospel and the history of the acts of the apostles. Let us become evangelists to our contemporaries as Luke is to us.